Who isn’t visiting natural environments and why?

Encouraging people to go out into natural environments is fast becoming a key facet of public health promotion. To devise effective strategies to meet this aim we need to know who is not visiting natural environments and why that might be. New research from ECEHH using Natural England’s MENE dataset has explored these questions.

The analysis showed that, on the whole, a quarter of the population reported visiting natural environments less than once a month (‘infrequent’ visitors). The groups who were more likely to be infrequent visitors were found to be ‘female, older, in poor health, of lower socioeconomic status, of ethnic minority status, live in relatively deprived areas with less neighbourhood greenspace and be further from the coast’. The analysis showed regional differences with people in the East and West Midlands being less likely to visit and some seasonal effects, with those who were interviewed for the MENE survey in spring and autumn being more likely to report infrequent visits.

The authors also explored the predictors of the reasons given for infrequent visits (Table 1). 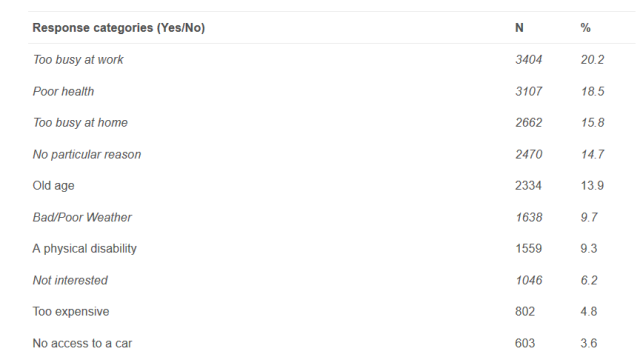 They found that those who reported being ‘too busy at home’, were more likely to be in part-time employment or education, married/cohabiting individuals, and with children in the household, while those in the lowest SES category, White British respondents, those with an illness/disability, and to have a car, were less likely to report being ‘too busy at home’ as a key reason. ‘Poor health’ was more likely to be given by people who live closer to the coast, older adults, in the lowest SES group, in part-time employment, retirement or not working, and by those living with a long-term illness/disability. Although females, older adults and those with a disability/illness were more likely to report being infrequent users of natural environments they were less likely give ‘not interested’ as the reason for infrequent visits.

Efforts to increase usage of natural environments for health outcomes include the Sustainable Development Goal 11 target which aims to, by 2030, ‘provide universal access to safe, inclusive and accessible, green and public spaces, in particular for women and children, older persons and persons with disabilities’ and are reflected in the accord between Public Health England (PHE) and the National Parks England (NPE) which details how they intend to ‘work proactively and practically together to secure better public health outcomes’ partly by ‘promoting accessible opportunities for walking, cycling, and a host of other activities to residents and visitors including those living in the major urban conurbations that surround the National Parks’. To achieve this PHE and NPE recognise that they will need to develop ‘dedicated outreach programmes to support those with particular accessibility needs or who otherwise encounter obstacles to accessing our National Parks in order that they can have safe, fulfilling experiences in these inspirational and life affirming places‘.

The authors suggest that the research ‘might help decision-makers focus and tailor their interventions within areas and amongst populations where they could have the largest impact’. They argue that to develop effective interventions to meet these aims there is a need to understand and respond to the specific reasons for low levels of use. For instance ‘one of the strongest predictors of feeling ‘too busy at home’ to engage with these natural environments was having children in the household (OR = 1.33). Thus… interventions… might instead aim to work with parents of young children to identify appropriate forms of support that would help them to access local parks and other greenspaces in ways that could potentially benefit both parents and children alike.’. Another key factor in low levels of use was reporting being ‘too busy at work’ to visit natural environments, the authors suggest that ‘there is perhaps a need to facilitate the integration of more time-efficient nature experiences into the working day, be it through greening work commutes and offices (Haaland & van den Bosch, 2015; Žlender & Ward Thompson, 2017), promoting a better outdoor break culture within office environments (Hitchings, 2010), or offering more virtual forms of nature ‘access’ within offices themselves, promoting at least fleeting moments to tap into the more restorative properties of nature within the workplace (Kaplan, 1993).